Here are the comets of interest that are visible:

Comet C/2017 K2 (PANSTARRS) - Discovered by Panoramic Survey Telescope and Rapid Response System in Hawaii. Perihelion for this comet is Dec. 19, 2022. At the end of May 2022 it was reported at mag 11.37 and was located in the constellation of Ophiuchus.

Comet 117P/Helin-Roman-Alu 1 perihelion date is September 07, 2022. This periodic comet was discovered in October 1989. This comet will be at the closest approach to Earth on July 3, 2022 over two astronomical units away. It was reported as 14.9 mag in May 2022 and located in Sagittarius. Although this will never be a "naked-eye"comet from Earth, it is of interest at Astra's because one of its discoverers was star woman, Eleanor Helin.

Recent Comet Brightness Estimates - reported to the Minor Planet Center at Harvard. Check here to see what comet observations have been made and submitted to the Center. Magnitude estimates are made by the astronomers and are subjective unless otherwise stated.

Images of the original artwork by Lauri Kunkel! ! !

My observations of past comets:

Make A Comet Ephemeris for your location!

Comet Missions and Exploration from Space!

Great Comets that shone during the Age of Information

For many astronomers, predicting whether or not a comet will be very bright is a tough challenge. In 2020, Comet C/2020 F3 took astronomers by surprise when it brightened up tremendously after its perihelion visit to the Sun. This sleeper was discovered on March 27, 2020 by the NEOWISE space telescope.

The comet was a 16-mag object when discovered. It was 2.1 au from the Sun at that time. It brightened quickly and reached 10th magnitude by the end of April. Perihelion was on July 3 and it will be 0.69 au at its closest approach to Earth around July 22.

For more information, check out the What's Up Almanac topic for July 2020.

The image below was created by Tom Ruen and licensed under CC BY-SA 4.0 and can be found on Wikipedia for more information. The bright yellow line in the diagram represents the ecliptic.

At last, an exciting comet that wasn't overbilled in the media. This comet was the fifth comet discovered by comet hunter Terry Lovejoy. Using CCD camera images taken with a Celestron C-8 telescope, Lovejoy found this comet from Queensland, Australia on August 17, 2014. A long period comet, the perihelion date for Comet Lovejoy was January 30, 2015. Closest approach to Earth was January 7 when it was 43.6 million miles or 70.2 million km away from us. It reached 4th magnitude within the limits for observing with the unaided eye.

The image of C/2014 Q2, Comet Lovejoy was taken by Alan Dyer. This was posted at Alan's site on Flickr. Used by permission, this image is ©2014 Alan Dyer. Check out Alan's site, Amazing Sky for more on astrophotography. 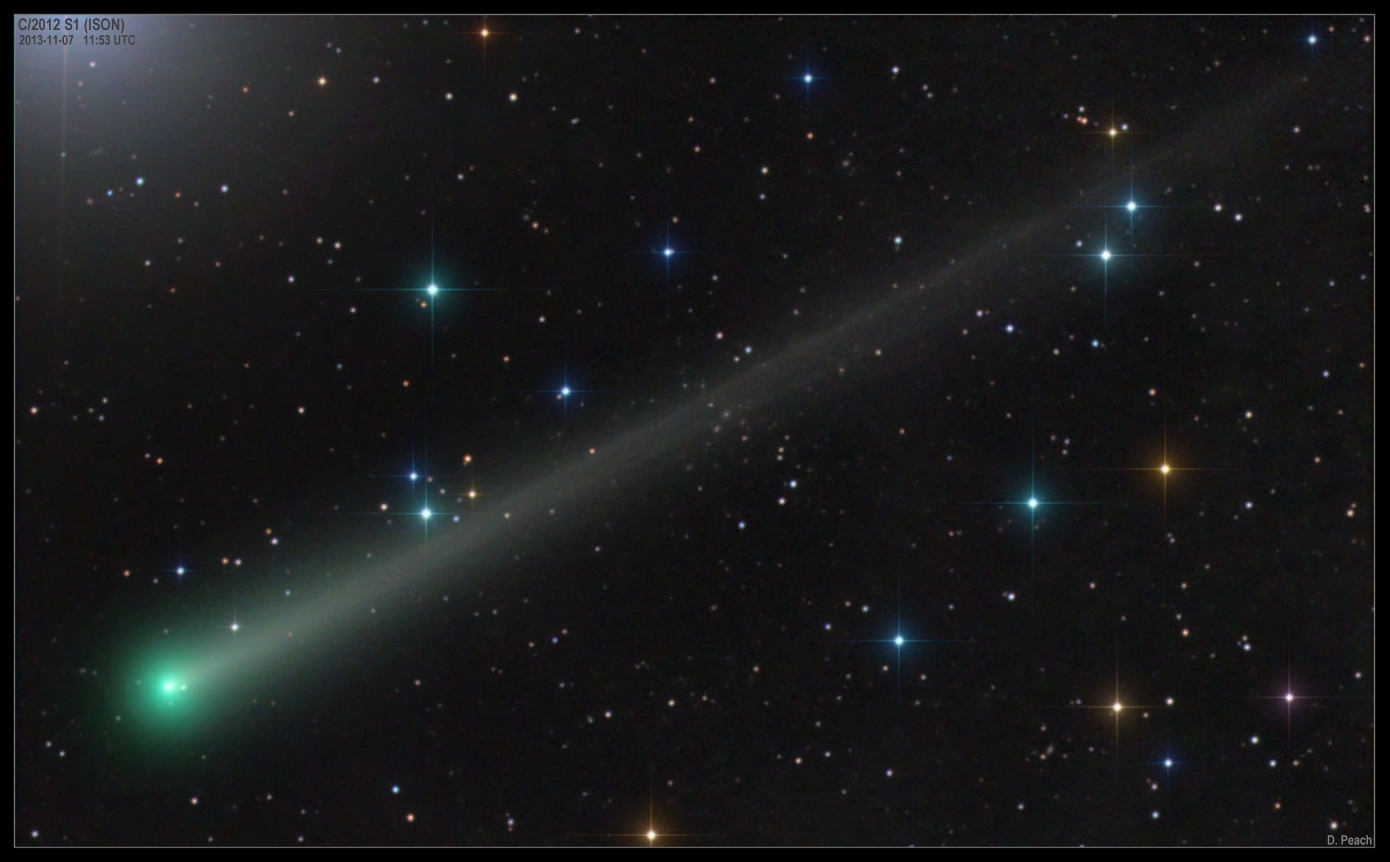 Comet C/2012 S1 (ISON) was sun grazing comet was discovered on September 21, 2012 by Artyom Novichonok and Vitali Nevski, using a 16-inch telescope that is part of the International Scientific Optical Network (ISON). It was nicknamed the Holiday comet because its perihelion date was November 28, Thanksgiving Day in the U.S. Despite high expectations, this comet broke apart due to its close encounter with the Sun. After a long life of 4.5 billion years, ISON was destroyed at perihelion.

The brightest comet of the new millenium so far! C/2006 P1 a.ka. Comet McNaught. Discovered by Robert McNaught of the Siding Spring Observatory in Australia on August 7, 2006. Perihelion was January 12, 2007. Peak magnitude estimate -0.6! This comet will be long remembered for its magnificent tail.

So long, Comet McNaught, it won't be back to visit the inner solar system again.

In 1995, Comet 73P/Schwassmann-Wachmann 3 split into "mini-comets" flying single file through space, much like Shoemaker/Levy9 that crashed into Jupiter. Closest approach to Earth: 5 million miles on May 15, 2006.

OR crash into planets....OR break up into pieces....OR hit the sun...Or are flung out of the solar system never to return

This false-color image of Hyakutake was made on the WIYN Telescope and provided courtesy of the WIYN Consortium, Inc.

D/1993 F2 The Comet that collided with Jupiter! Links to info on Shoemaker-Levy9

And when they fade, they really fade...here's a Halley Page:

Views of the Solar System Halley Page
Well, 1986 was a bit before the age of information, wasn't it???

- Comet Elenin will not destory the Earth - Astro Bob

Links to other Stargate Pages:

Beam me back, Astra